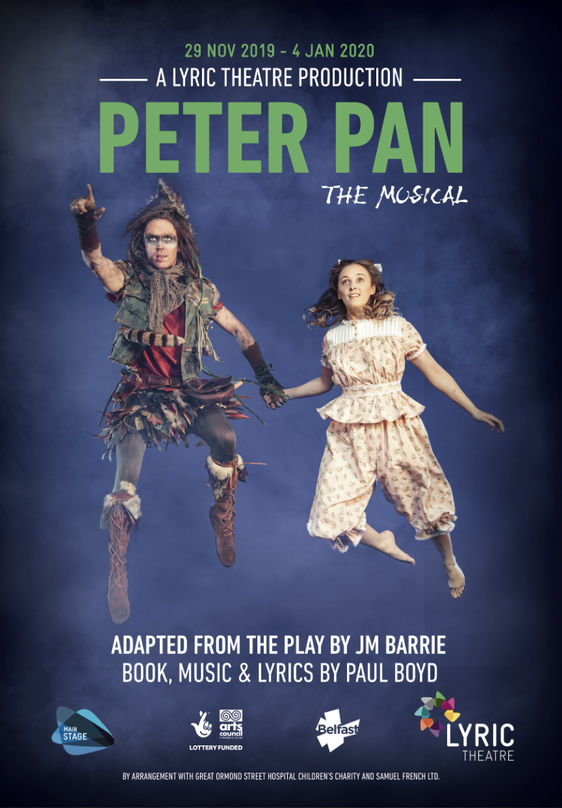 Paul Boyd's adaptation of JM Barrie's classic story of the boy who wouldn't grew up which was filmed live at the Lyric Theatre, Belfast in 2019 and streamed online in 2020.
This page contains affiliate links and Filmed Live Musicals may earn income from qualifying purchases.
Stage Production Notes

The play was revived in New York at the Knickerbocker Theatre in 1924 starring Marilyn Miller, and at the Civic Repertory Theatre in 1928 starring Eva Le Gallienne.

Barrie also wrote a novelization of the play under the title Peter and Wendy which was published in 1911 and became an instant best-seller. It remains in print today.

In 1929, Barrie gifted the rights for Peter Pan to the Great Ormond Street Hospital, a hospital for seriously ill children. In 1988, the House of Lords voted to provide a clause in British copyright legislation to ensure that the hospital would continue to receive royalties from the play in perpetuity.

There have been several musical adaptations of JM Barrie's play:
See History of Peter Pan Musicals at the bottom of this page for more details.

Peter Pan - the Musical
​Paul Boyd is a prolific and multi-award winning composer and director. Boyd has written 26 stage musicals that have been widely performed, including in the West End.

The Lyric Theatre, Belfast, Northern Ireland’s largest employer of freelance actors and other theatre professionals, commissioned Boyd to write Peter Pan - the Musical for the 2019 Christmas season. It was Boyd’s twenty-fifth musical, and his third commission from the Lyric. Previous commissions included the highly successful Alice the Musical (1998), Hansel and Grettel (1999 and 2012), and Molly Wobbly’s Tit Factory (2011). Alice the Musical has been professionally performed in Australia, Germany, Japan, and the USA, received a 20th anniversary production at the Lyric in 2018 under Boyd’s direction, and was briefly available to stream during the theatre lockdown in March 2020. Molly Wobbly’s Tit Factory also played the Edinburgh Fringe, off-West End, and in the West End, also under Boyd’s direction.

Peter Pan - The Musical premiered at the Lyric Theatre, Belfast, as part of the theatre’s Christmas season on November 29, 2019. According to Boyd’s website, the musical broke “all previous box office records at the venue.”

The production design was reportedly inspired by Mabel Lucie Attwell’s illustrations from the first edition of the play.

The production received glowing reviews. In a four-star review for The Stage, Jane Coyle described the adaptation as a “thing of beauty,” and noted its success in “achieving a tricky balance between vintage and modern.” Coyle concluded the show was “Musically haunting and [a] visually gorgeous new version of JM Barrie’s evergreen classic.”

No More Workshorse reviewer Cathy Brown felt that the pacing was sometimes slow, but described the first flying scene as “the purest theatrical magic.” Brown also praised the high production values throughout including Tinkerbell’s “energetic, sparkling ball of light,” and “striking animation and… stunning light show…”

Some reviewers noted that the pre-recorded tracks were too loud, though were generally positive about the songs themselves. Brown praised Boyd’s “excellent songs,” as well as the production’s “strong” singers.

​In response to the global theatre shutdown, and due to the success of an earlier stream of Alice - the Musical, the Lyric Theatre, Belfast released Peter Pan - The Musical online to watch on Easter weekend — April 10 - 13, 2020. The musical was available for free on YouTube, and viewers were encouraged to make a donation to help offset the significant impact of the shutdown on the theatre’s finances.

Due to popular demand, the stream was extended by a week.

​There have been several musical adaptations of JM Barries' original play about the boy who wouldn't grow up including:
Peter Pan
by Leonard Bernstein (1950)
The first musical adaptation of Peter Pan was composed by Leonard Bernstein and directed by John Burrell and Wendy Toye (though as noted by Garth Edwin Sunderland, Bernstein was working in Europe during rehearsals, and not directly involved in the actual production). The musical opened at the Imperial Theatre on April 24, 1950 starring Jean Arthur in the title role and Boris Karloff as Captain Hook. During its run the show transferred to the St. James Theatre, and after total of 321 Broadway performances closed on January 27, 1951. The musical embarked on a national tour starring Veronica Lake and Lawrence Tibbett, though the tour was cancelled part-way through its run.

Almost 70 years after its premier, Bernstein’s Peter Pan was once again performed as part of Bernstein’s centennial celebrations, receiving 30 productions by 6 presenters in 6 countries across Asia, Europe, and North America.

An original cast recording of Bernstein’s Peter Pan is available on CD, though it uses alternative instrumental music by Alec Wilder. In 2005, Koch released a studio recording of the complete Bernstein score conducted by Alexander Frey. 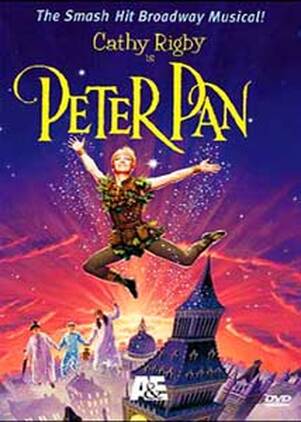 The most well-known musical version of Peter Pan, with music by Mark Charlap and lyrics by Carolyn Leigh, additional music by Jule Styne and additional lyrics by Betty Comden and Adolph Green opened on Broadway at the Winter Garden Theatre on October 29, 1954. Directed and choreographed by Jerome Robbins, the production featured Mary Martin as Peter Pan and Cyril Ritchard as Captain Hook. Incidental music was composed by Elmer Bernstein (no relation to Leonard, though they were friends) and Trude Rittman, the latter of whom was the musical coordinator on the Bernstein production.

Shortly after the Broadway run had closed in 1955, Peter Pan was filmed live (without an in-person audience) at NBC studios in a special made-for-television “spectacular.” The telecast was immensely popular, receiving high critical praise and drawing an unprecedented 65 million viewers.

With a few cast changes, the telecast was repeated a year later in 1956 in full-color. The  1956 telecast was viewed by between 55 to 60 million people. Video Artists International released the kinescope of the 1956 broadcast on Blu-ray and DVD in 2015. The Blu-ray also includes the original 1955 broadcast.

A new television production, again starring Martin and Ritchard, was broadcast in 1960. This production was also taped and became an annual television favorite. It is also available on DVD and Blu-Ray.

Another television version of Peter Pan aired in 1970 on NBC’s Hallmark Hall of Fame. The production featured a new score by Anthony Newley and Leslie Briccuse, and starred Mia Farrow as Peter Pan and Danny Kaye as Captain Hook.

The Robbins version of Peter Pan has been revived multiple times on Broadway, most notably starring former Olympic gymnast Cathy Rigby. The Rigby revival saw three Broadway runs, and multiple national tours, with a run at the La Mirada Theatre for the Performing Arts in La Mirada, California being filmed live in early 2000. Learn more about the filmed live production at Peter Pan (2000).

​Another television version of Peter Pan aired in 1970 on NBC’s Hallmark Hall of Fame. The production featured a new score by Anthony Newley and Leslie Briccuse, and starred Mia Farrow as Peter Pan and Danny Kaye as Captain Hook. 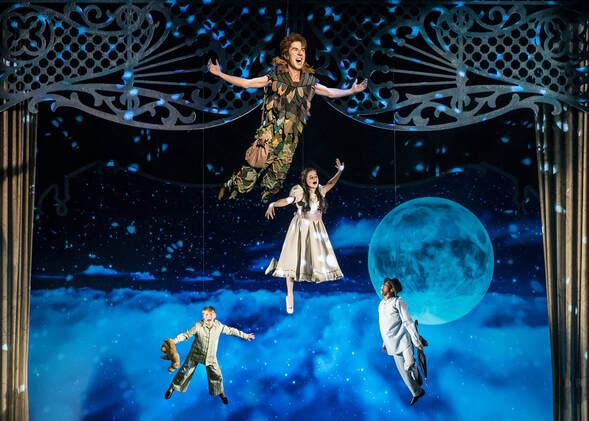 George Stiles and Anthony Drewe are a prolific, multi-award winning, musical theatre writing duo from the UK whose work has been performed around the world and translated into multiple languages. In addition to Peter Pan: A Musical Adventure, their works include Mary Poppins, Honk!, Soho Cinders, Betty Blue Eyes, Travels with my Aunt, Just So, Tutankhamun, a trilogy of 50-minute musicals for younger audiences — Goldilocks and the Three Bears, The Three Billy Goats Gruff and The Three Little Pigs, Half a Sixpence (also known as Kipps) and The Wind in the Willows. The latter two were filmed live in the West End and are available to stream on demand.

Stiles and Drewe’s musical take of JM Barrie’s play, Peter Pan: A Musical Adventure, first premiered at Denmark’s International Musical of the Year in 1997. The musical was awarded Best Song and The Orchestra’s Award for Best Musical.

Songs from the musical were featured on the inaugural episode of In the Company of Sondheim, a six-part Radio 2 programme hosted by Sondheim about new British musical theatre which aired in early January 1997. Observer theatre critic Michael Coveney described Stiles and Drewe’s music as “very good.” Sunday Telegraph reviewer Russell Davies was less kind, who described the song “Never Land” as “the usual sugar-bowl. It was twinkly, trite and twee all at once.” An ad in The Independent stated the episode had “rebarbative moments, but provokes some interesting conversation.”

In 2001, the musical was performed in a staged concert version at Royal Festival Hall with the BBC Symphony Orchestra. Directed by Julia McKenzie, the concert featured John Thaw as Captain Hook, Joe McFadden as Peter Pan, Jenna Russell as Mrs. Darling, Sheila Hancock as the Storyteller, and real-life siblings Laura Michelle Kelly, Jorim Kelly, and Nathan Kelly in the roles of Wendy, Michael, and John.

An audio recording of the Royal Festival Hall concert was broadcast on BBC Radio 3 on December 31, 2001.

A year later, in December 2002, the concert was reprised at the Royal Festival Hall in a “fuller semi-staged” version with the Royal Philharmonic Orchestra. Directed by Ian Talbot, the 2002 cast featured Richard Wilson as Captain Hook, James Gillian as Peter, Susannah York as the Storyteller, Lottie Meyer as Wendy, and David Bamber as Smee.

Peter Pan: A Musical Adventure premiered in the United States at Philadelphia’s Prince Theatre in December 2002.

In December 2007, Birmingham Repertory Theatre staged the UK’s first fully-staged production of the Stiles and Drewe musical. Directed by Rachel Kavanaugh, choreographed by Jenny Arnold, and designed by Peter McKintosh the production featured Pater Caulfield as Peter Pan, Gina Beck as Wendy, David Birrell as Captain Hook, Gerald Carey as Smee, and Fiona Dunn as the voice of Tinkerbell.

In 2018, the Chicago Shakespeare Theater presented Peter Pan: A Musical Adventure as part of their summer program. It was filmed live during its run and made available to stream during the 2020 theatre shutdown.

Presented by JGH Associates, the Malthouse Theatre in Canterbury is scheduled to present a new production of Peter Pan: A Musical Adventure in March 2023. With Joseph Garden Hodges directing, and choreography by Jay Gardner Hodges, the production is set to feature a cast and orchestra of over one hundred.

Peter Pan: A Musical Adventure is available for licensing via Concord Theatricals.

Another musical by Stiles and Drewe musical, Half a Sixpence, was filmed live in the West End in 2016 and released under the title of Kipps (its new licensing name). The capture was broadcast in December 2021 on Sky Arts, where it is still available to view.