Your Arms Too Short
​to Box With God

Stage Production Notes  ​
Based on the Book of Matthew, this soaring celebration in song and dance tells the story of Jesus, his apostles, and the women who inspired, followed and consoled him. From parables to miracles, from crucifixion to resurrection, it’s a tale of love, betrayal and redemption, told through rousing gospel music.

James Weldon Johnson used the phrase “Your arms too short to box with God” in his novel The Autobiography of an Ex-Colored Man, and in the poem “The Prodigal Son.”

Director and writer Vinnette Carroll developed the musical from the Gospel of St. Matthew. Carroll directed over 50 productions during her 10 years with the Urban Arts Corps (UAC), including the much celebrated Don’t Bother Me I, I Can’t Cope, and the short-lived But Never Jam Today. Carroll has been credited with infusing Broadway musicals of the 1960s and 70s with a unique African American aesthetic.

The musical was further developed and was performed in Washington, Chicago, and Philadelphia.

Director Harry Bryce (who helmed the Westcoast Black Theatre Troupe production in 2020), has noted the significance of the casting, stating "Carroll’s gospel celebration... speaks directly to the peoples of Africa, and the African diaspora worldwide. She portrayed Jesus and the Israelites as people of color. And they were. That’s historically accurate."

New York Times critic Clive Barns stated “It is funny and fervent—an unusual combination—and it has an onrushing vitality that practically pins you to your seat.” Barnes compared the musical to Andrew Lloyd Webber’s  “all trash and glitter” Jesus Christ Superstar, and noted that the “effect is totally different” and under Carroll’s direction, her musical had “the emblematic simplicity of a medieval morality play.”

The production won one Tony Award for Best Featured Actress in a Musical (Delores Hall), and was nominated for another three including Best Book of a Musical (Vinnette Carroll), Best Choreography (Talley Beatty), and Best Direction of a Musical (Vinnette Carroll). It was Carroll’s second Tony nomination for Best Director. Her first nomination in 1972, for Don’t Bother Me, I Can’t Cope, made her the first (and still the only) African American woman nominated in the Best Director category.

In an interview for the New York Times just prior to Your Arms Too Short opened, Carroll called out the racism of the industry by stating “…the chief reason that I do so many musicals is that white producers won't pick up anything intellectual by us, no matter how good it is. They only want the singing and the dancing…white people have been so programmed into dealing in a certain way with us that they're not even aware of it. It makes it difficult for us, as artists, to be the people we want to be.”

ABC Records released an original cast album on vinyl in 1977.

In November 1977, the production transferred to the Eugene O’Neill Theatre where it played until January 1, 1978.

Your Arms Too Short to Box With God embarked on a national tour, traveling to 66 cities around the United States.

The musical re-opened on Broadway in 1980 with several cast members from the original production. It first played at the Ambassador Theatre before transferring to the Belasco Theatre. Jennifer-Yvette Holliday received rave reviews for her performance, and she was nominated for a Drama Desk Award for Outstanding Featured Actress in Musical. The second run on Broadway played for 149 performances.

The production continued to tour, and was re-worked when Patti LaBelle joined the cast. The musical returned to Broadway for a second time, opening at the Alvin Theatre (now the Neil Simon) in the fall of 1982. Patti LaBelle made her Broadway debut, along with another popular singer, Al Green. Green was nominated for a Tony Award for Best Actor in a Musical for his performance. The third outing on Broadway ran for 69 performances.

Vinnette Carroll re-staged Your Arms Too Short in 1996 at the Beacon Theatre in New York City. The production also played at the Wiltern Theatre in Los Angeles featuring Stephanie Mills and Teddy Pendergrass. Variety reviewer Christoper Meeks noted that in the updated production, Carroll had "inadvertently bypassed the freshness of her original version."

Victory in Praise Church in Stockton, California, celebrated its 15th anniversary with a production of Your Arms Too Short to Box With God in April 2010. The production was filmed live by A&E Digital Productions with 4 cameras and a dolly, though it’s unclear if the capture was publicly released. A short excerpt is available on YouTube.

Florida’s Westcoast Black Theatre Troupe (WBTT) produced Your Arms Too Short to Box With God as part of its 2019/20 20th anniversary season, which focused on celebrating women. The Vinnette Carroll musical was the second WBTT production to play in the freshly renovated Donelly Family Theatre, a 200-seat theatre within the new Gerri Aaron & the Aaron Family Foundation Theatre Building.

According to reviewer William S. Oser, as there was no published script, director Harry Bryce, who worked with Vinnette Carroll for over 2 decades, and musical director James Dodge II had to rely on memory, the LP recording, and other materials to re-create the book and score.

The production was slated to run until April 5, 2020, however three weeks after opening was forced to close as a result of the COVID-19 pandemic. ​ 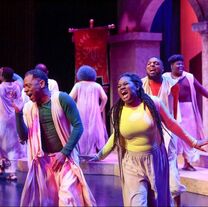 Filmed Production Notes
Your Arms Too Short to Box With God was filmed during its brief run at Westcoast Black Theatre Troupe.

In early April 2020, the musical was the first production released on the WBTT’s new streaming platform, WBTT LIVE!. Due to contract agreements with Equity, the production was only available to stream until April 19, or until the stream hit 4,200 views.

Tickets to the stream were priced at $15US per household.