Stage Production Notes  ​
Set in a fictitious town in Japan, The Mikado is a tongue-in-cheek satire about Victorian society. Nanki-Poo, son of the Mikado, has fled to avoid marrying Katisha. He wishes to marry Yum-Yum, who is the ward of Ko-Ko, the lord high executioner. Ko-Ko is struggling to execute anyone, and offers to trade Nanki-Poo’s life for a month of marriage to Yum-Yum.

The Mikado was first performed in 1865 at the Savoy Theatre in London and was one of the longest running shows of its day. Although it was Gilbert and Sullivan’s ninth collaboration, it was their first entirely original work (previous shows had been based on earlier works), and their first non-serious work.

A jazz version of the show opened in 1938 under the title The Swing Mikado. Michael Todd opened The Hot Mikado a year later at the Broadhurst Theatre. The show featured an entirely African American cast, and swing orchestrations. The production ran for 85 performances.

The music for The Hot Mikado was considered mostly lost, and in 1986 Rob Bowman and David H. Bell re-wrote a new swing version entitled Hot Mikado.

Opera Australia was formed in 1985, and one of its first productions was The Mikado. This production was revived at the Festival of Sydney in 1987.

The Festival of Sydney production received mostly positive reviews. Fred Blanks of The Sydney Morning Herald stated that while the production had “Wit, ingenuity, and a veritable riot of colourful and restless spectacle,” the performances of the cast were not of equal standard. Blanks concluded first-time attendees would enjoy the production, but felt that “traditionalists” should stay home.

While The Mikado remains one of Gilbert & Sullivan's most performed and celebrated operettas, it has attracted controversy in recent years for its dated portrayal of Japanese people and culture. Professional and amateur productions have faced strong backlash, or been entirely cancelled, for casting mostly caucasian actors and using “yellowface.”

Filmed Production Notes
Opera Australia’s production of The Mikado was filmed live at the Sydney Opera House on February 25, 1987.

The program was aired on November 8, 1987 on the the ABC (Australian Broadcasting Corporation).

Sponsored by Esso, The Mikado was simulcast on ABC radio and television on November 8, 1987.

A quarter-page advert for the simulcast appeared in major Australian newspapers on November 7, 1987. The text, reprinted below, demonstrates the attempt to appeal to a wide Australian audience who were perhaps not enthused about the idea of tuning in to Gilbert & Sullivan. 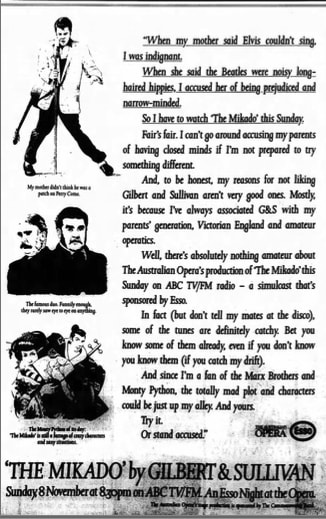 Other filmed live versions of The Mikado include Essgee Entertainment’s 1996 production, Opera Australia’s 2011 production, and the English National Opera’s 2015 production.