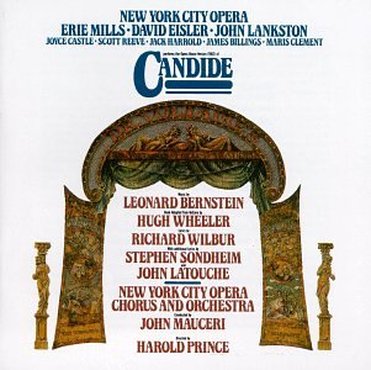 Stage Production Notes  ​
​Leonard Bernstein’s operetta Candide was based on the French novel Candide, ou L’Optimisme by Enlightenment philosopher Voltaire. The story was a criticism of the notion that “All is for the best in the best of all possible worlds,” and followed the life of Candide, a young man seeking happiness in the world and encountering war, famine, and grief.

Initially collaborating with Lillian Hellman, Bernstein wrote the score in the early 1950s. He premiered the Overture in 1956 with the New York Philharmonic where it was an instant hit.

Candide was first performed in Boston. The out-of-town try-outs were infamous for running long, with the curtain coming down until well after midnight on at least one occasion.

Candide opened on Broadway at the Martin Beck Theatre on December 1, 1956. The production was directed by Tyrone Guthrie, and featured Max Adrian as Dr. Pangloss, Barbara Cook as Cunegonde, Irra Petina as the Old Lady, and Robert Rouseville as Candide.

The production received positive reviews, with New York Times theatre critic Brooks Atkinson describing it as a “brilliant musical satire,” and praising Bernstein’s “wonderful score,” and the visual sumptuousness of the production.

Candide was nominated for multiple awards, including five Tony Awards.

Despite the critical praise, the show was a commercial flop and closed on February 2, 1957 after 73 performances.

In 1982, under the direction of Hal Prince, the New York City Opera staged a popular new production of Candide which became known as the “opera house version.” The lavish production featured 46 cast members, and an orchestra of 52 players.

The opera house version was performed in repertory until 1984, and again during a short 8 performance run in 1986. During the latter run, Candide was broadcast live on PBS’ Live from Lincoln Center.

In 1988, the Scottish Opera and Old Vic co-produced a revised staging with new lyrics by John Wells and musical direction by John Mauceri. The popular production transferred to the West End where it won the Olivier Award for Best New Musical. The production was filmed at the Old Vic and broadcast on television on the BBC.

Leonard Bernstein made further revisions the Scottish Opera/Old Vic production, and created what is now considered the “definitive version.” This version was performed in concert at the Barbican Theatre in London on December 12 and 13, 1989, under the baton of Bernstein himself. The second Barbican concert was was filmed live and released on VHS, Laserdisc. It was later released on DVD.

A studio recording with the cast of the Barbican concert was released in 1991 under the title Bernstein Conducts Candide.

Under the direction of Lonny Price, the New York Philharmonic presented a staged concert version of Candide at Lincoln Center as a part of its 2004 season. This production was also filmed live.
​
Candide has continued to be performed around the world, with productions in England, Scotland, Israel, and across the United States. It is one of the Bernstein’s most frequently performed symphonic compositions.
Filmed Production Notes
On November 12, 1986, the New York City Opera production of Candide was broadcast across North American televisions on PBS’ Live from Lincoln Center.