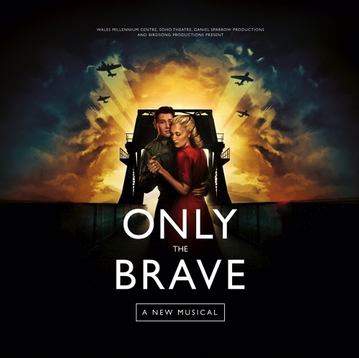 Based on true stories, Only the Brave follows Captain John Howard and Lieutenant Denholm Brotheridge, and their wives Joy and Maggie, as the soldiers prepare for the D-Day landings.
Stage Production Notes  ​
Composer Matthew Brind and Steve Coleman began work on Only the Brave in 1999. The pair were inspired by Saving Private Ryan and stories told by Brind’s grandfather who had fought on the beach on D-Day.

Only the Brave premiered in a 75-minute version at the Edinburgh Fringe in 2008, running from July 31 to August 25 at the George Square Theatre. The cast featured Keith Jack and Niamh Perry, both of whom had gained notoriety after appearing in reality tv shows Any Dream Will Do and I’d Do Anything.

The musical received mixed reviews. WhatsOnStage critic Terri Paddock stated “It's truly stirring stuff… deeply moving and imminently watchable,” while Broadway World’s Robert Gould noted "If you are a discerning fan of serious musical theatre then perhaps a more apt phrase would be 'only the brave should come’." Fringe Guru’s Craig Thompson concurred with Gould, stating it was “just a boring musical.” Writing for The Telegraph, Mark Monahan was a little kinder, noting the musical felt like a West End try-out, and “the story moves with a mission.”

A cast recording was released in 2008.

After eight years in development, Only the Brave received a full-length production the Donald Gordon Theatre at the Wales Millennium Centre (WMC) in March 2016. It was WMC’s first main stage co-production, and the first major musical to be developed in Wales.

Although The Stage’s Rosemary Waugh found the performances of the cast to be “accomplished,” she found “a lack of distinction between much of the music,” and the show overall to be uneven. Writing for The Reviews Hub, Jacqui Onions praised Rachel Wagstaff’s beautiful writing, and Steve Marmion’s fluid and clever direction, while Wales Arts Review critic Jemma Beggs enthused that the musical "has the aura of one of the established greats whilst still feeling fresh and contemporary.” In his review for Get the Chance, James Briggs noted summarized it was "a truly prodigious, outstanding musical and a pleasure to watch.” ​
Filmed Production Notes
The Wales Millennium Centre production was filmed by AdVision TV for archival purposes in April 2016.