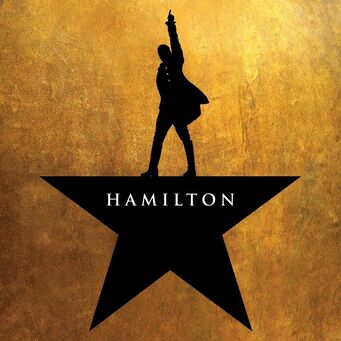 ​Based on Ron Chernow’s biography Alexander Hamilton, Lin-Manuel Miranda’s musical Hamilton is a sung-through re-telling of the story of one of America’s founding fathers. Described as a “hip-hop biomusical” and “American history for grown-ups,” the musical has become a much-loved, highly-lauded, worldwide sensation.
Stage Production Notes  ​
Ron Chernow's biography Alexander Hamilton was published in 2004. It was on the New York Times Best Sellers List for 3 months, and won multiple awards including the George Washington Book Prize, Los Angeles Times Book Prize, the National Book Critics Circle Award, and New York Times 10 Best Books of the Year Award.

Fresh from the success of his Tony Award winning Broadway debut In the Heights, Lin-Manuel Miranda read the book in 2008 and devised the idea of creating a hiphop album on Hamilton’s life — The Hamilton Mixtape.
On May 12, 2009, Lin-Manuel Miranda, along with musical director Alex Lacamoire, performed the opening song from the mixtape at the White House as part of “An Evening of Poetry, Music, and the Spoken Word.”

Two years later, in June 2011, Lin-Manuel Miranda performed a second song from the mixtape, “My Shot,” at the Ars Nova annual benefit. Tommy Kail, director of In the Heights, asked to assist overseeing the The Hamilton Mixtape and to stage a “low-key” studio reading. Shortly after, Lincoln Center invited Miranda to perform in their American Songbook concert series.

In the summer of 2013, the musical was given a week-long workshop at Vassar College through the New York Stage and Film developmental series.

In December 2013, The Hamilton Mixtape began workshops through the Public Theater.

The musical, now titled Hamilton, was given its first full performance on May 9, 2014 at the 52nd Street Project. Over the course of the weekend, the show was performed 4 times to a total audience of about 600 people and quickly generated buzz as the next hot thing in theatre.

After a month of previews, Hamilton opened off-Broadway at the Public Theater on February 17, 2015.  It was produced for $1.7 million through an “enhancement deal” — Broadway producers covered the cost of the run, and the Public would receive a percentage of the income if the musical succeeded on Broadway.

The off-Broadway try-out was a smash hit and extended its run three times.

Critics lavished praise on Lin-Manuel’s eclectic score and the masterfully-complex, yet evocative and stirring, story-telling. Critics also delighted at how much fun they had in being served a history lesson.

When Hamilton transferred to Broadway, tickets were in such demand, a lottery called Ham4Ham (providing $10 seats in the front row) was instituted from the first day previews. On July 13, 2015, over 700 people showed up to enter the lottery, and, reportedly moved by the crowd, Lin-Manuel Miranda made a speech from the stage door. He performed for the next crowd the next day, and #Ham4Ham — performances at the stage door by Lin-Manuel Miranda, cast members, and a variety of surprise guests — became a regular feature on the Wednesday and Saturday lottery draws. Many of the Ham4Ham performances were documented and shared on YouTube by writer and producer Howard Sherman.

After 33 previews, and with record advance ticket sales in the tens of millions (sources differ between $32 million and $57 million), Hamilton officially opened on Broadway at the Richard Rodgers on August 16, 2015.

Once again, Hamilton received rave reviews. Ben Brantley of The New York Times noted “…this confluence of what’s heard on the American musical stage and what’s heard on the airwaves and in the clubs hasn’t existed for at least six decades.” Variety’s Marilyn Stasio stated “…it takes about two seconds to surrender to the musical sweep of the sung-through score and to Miranda’s amazing vision of his towering historical subject as an ideological contemporary who reflects the thoughts and speaks the language of a vibrant young generation of immigrant strivers.”

Hamilton was nominated for numerous awards. Its wins include:
The 2016 Tony Awards for Best Actor and Best Featured Actor and Actress helped secure another historic first, where all 4 musical acting categories were won by actors of color (Cynthia Erivo won Best Actress for her work in The Color Purple).

In its casting of Black and non-white actors as historical figures who were white, the musical’s creators believe they are challenging the idea of who can tell the history of America and who owns that history. In the words of director Thomas Kail, “This is story about America then, told by America now.” For Christopher Jackson, an actor of color, the portrayal of three presidents by Black actors, is itself “our own form of protest” against those who believe that people of color have no place in the United States. Similarly, Leslie Odom Jr. has stated "It is still a political statement to just put beautiful images of Black and brown people out into the world, and it is necessary."

Despite the non-traditional casting, Hamilton has received criticism for not including Indigenous Americans, not adequately addressing slavery, and for not including historical people of color in its storytelling. In an often cited paper for The Public Historian, Dr. Lyra D. Monteiro has noted that Hamilton promotes “Founders Chic,” a writing device which attempts to make the U.S. Founding Fathers more relatable to modern audiences, but which often downplays, or ignores, their participation in slavery. Monteiro has also stated that although the cast is populated with actors of color, the story being presented is “still white history.”

The musical also received criticism for promoting the idea of a “bootstraps” narrative (the notion that Alexander Hamilton was successful solely because of his hard work, and that any other immigrants who did not succeed simply did work hard enough), and its problematic female representation. As noted by theatre scholar James McMaster on HowlRound, Hamilton does not pass the Bechdel Test (where two named female characters speak to each other about something other than a man), and all “desires, fears, hopes, plans, and narratives” of the women in the musical exist only in relation to the title character.

A comprehensive book investigating the criticisms against Hamilton, Historians on Hamilton: How a Blockbuster Musical Is Restaging America's Past was published in 2018.

Many commentators who wrote criticisms of Hamilton were also keen to point out how much they had enjoyed the musical, and appreciated its artistic achievements.

The cast recording was released in September 2015. While musical cast albums are usually recorded over a few days, Hamilton was recorded over 2 weeks. According to Jeremy McCarter in Hamilton: The Revolution, “Lin wanted a cast album that would hold up as a pop album in its own right.”

Miranda’s hopes were more than fulfilled. The cast recording was the highest-charting Broadway album since Camelot in 1963, and the first cast recording to reach number one on the Top Rap Albums chart. It is currently the highest-selling Broadway cast album of all time, and, as of the time of writing in June 2020, still remains on the Billboard 200 chart.

Hamilton received a $1.5 million grant from the Rockerfeller Foundation which provided 20,000 New York City public school students with $10 tickets to the show combined with an educational program provided by the Gilder Lehman Institute of American History. Now known as EduHam, the program has been extended to over 160,000 students across the United States. Since the COVID-19 shutdown in March 2020, EduHam has been made available online with EduHam at Home, and will be available for free until August 2020.

The musical was also groundbreaking for the profit-sharing contract negotiated a year into the Broadway run that would see profits from the show shared with all the actors who had participated in workshops and the original production.

2016 proved to be another big year for Hamilton, with the release of a book, a documentary, and the first production outside of New York.

Hamilton: The Revolution is a history of the development of the musical co-written by Lin-Manuel Miranda and Jeremy McCarter. The book included a heavily-annotated libretto, and Barnes & Noble also released a Deluxe edition that features a poster, frameable reproductions of collectible artifacts, photography portraits, and a bonus CD of Lin-Manuel Miranda reading the annotations.

Hamilton opened in Chicago at the PrivateBank Theatre on September 27, 2016 and ran until January 5, 2020.

Though not officially affiliated with the show, a podcast about the musical, The Hamilcast, was launched by Gillian Pensavalle in January 2016. To date, the podcast has released over 200 episodes and features interviews with cast members, the entire creative team, historians, and Broadway actors.

The first U.S. national tour (Phillip Company) commenced in March 2017 and was followed by two more tours. The third tour (Peggy Company) was playing at the Orpheum Theatre in San Francisco when the COVID-19 shutdown was announced.

Hamilton commenced previews on the West End at the Victoria Palace Theatre on December 6, 2017, and officially opened December 21, 2017.

Hamilton played a limited-engagement run in Puerto Rico from January 11, 2019 until January 27, 2019. The event reportedly raised over $14 million which was distributed to artists and arts programs throughout Puerto Rico, still recovering from Hurricane Maria.

The musical was scheduled to open at the Pantages Theatre in Los Angeles in March 2020.

All current productions of Hamilton are on hold due to the COVID-19 pandemic.

An Australian run is scheduled to open in Sydney, in March 2021.

It is predicted that when licensing is made available, Hamilton will be the most produced musical in the United States.
Filmed Production Notes
​Produced by RadicalMedia, and directed by Thomas Kail, Hamilton was filmed live on Broadway in June 2016. The 9-camera shoot was completed over three days, with a Sunday matinee and Tuesday evening performance captured before a live audience. Close-ups, dolly, crane, and Steadicam shots, and extra coverage, were filmed without an audience present.

On February 3, 2020, following an intense bidding war, Disney bought the film of Hamilton for around $75 million. The final amount was adjusted following the decision to bring forward the air date, and to stream the film on Disney+ rather than release it in cinemas.

Initially scheduled to air in cinemas in October 2021, the air date was bought forward as a result of the COVID-19 pandemic and shutdown of live theatre. Hamilton will stream on Disney+ from July 3, 2020.

According to Lin-Manuel Miranda on Twitter, the musical will remain on the streaming platform indefinitely. 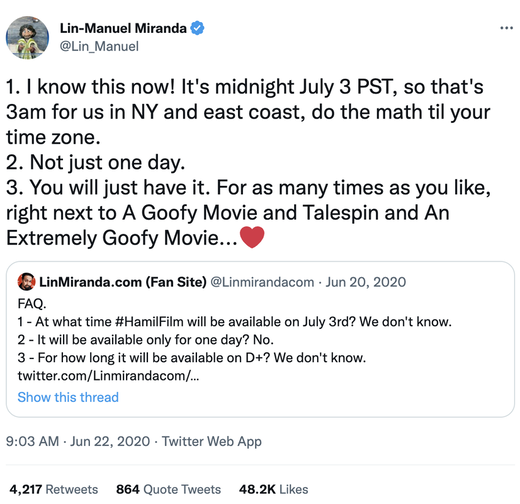 Just over a week before the release of Hamilton, Disney+ stopped offering its 7-day free trial, though Disney denied this change had anything to do with the film’s release.

Just prior to the film's release, the official Hamilton musical website did not make any reference to Disney+ stream, though announcements about the partnership with Disney were included on the News page.

Several commentators have noted that the digital release of Hamilton could change the way theatre is made available on screen, and that it will likely lead to a rise in live theatre captures.