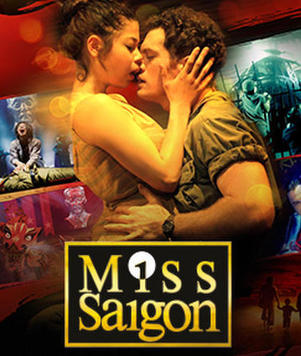 ​Miss Saigon is a modernized re-telling of Puccini’s Madame Butterfly, set against the backdrop of the Vietnam War during the Fall of Saigon. The musical tells the ill-fated love story of Kim, a young woman in Saigon, and an American G.I., Chris.
​Stage Production Notes​
The original production of Miss Saigon opened at the Theatre Royal, Drury Lane, on September 20, 1989 and went on to run for ten years. The production featured stand-out performances by Filipino actor Lea Salonga as Kim, and Jonathan Pryce as the Engineer, who both went on to win Olivier and Tony awards for their performances.

Produced by impresario Sir Cameron Macintosh, the lavish Miss Saigon churned excitement with the presence of an actual helicopter landing on stage.

The Broadway production opened at the Broadway Theatre on April 11, 1991, and also ran for ten years. The musical received much criticism for utilizing yellow-face in its casting of Caucasian actor Jonathan Pryce as a Eurasian character.

Miss Saigon has since been performed around the world.

To celebrate the 25th Anniversary of Miss Saigon in 2014, Cameron Macintosh announced a London revival. On the first day that tickets were released to the public, the show broke office records.

The revival of Miss Saigon opened at the Prince Edward Theatre on May 21, 2014. It featured an 18-year-old Eva Noblezada in her West End debut as Kim, and Alistair Brammer as Chris.

The production received mixed, though generally positive, reviews. Henry Hitchings of The Standard described the revival as “visually rich” and praised the performances of the cast, particularly the “remarkable find” of Eva Noblezada. Writing for the Telegraph, Charles Spencer also praised Noblezada, and noted the “cinematic fluency” of the production.

A special gala was held on September 22, 2014. When the tickets went on sale, 18,000 eager fans reportedly crashed the website and the show sold out within minutes.

Following the gala performance, members of the original cast performed songs from the show at the curtain call.

The gala performance aired on BBC Radio 2 on September 28, 2014, and the recording was made available for one week on the BBC Radio 2 website.

The gala was also filmed and released for special one-day only screenings in the UK and USA. See below for more information.

In 2017, the 25th Anniversary production transferred to Broadway where it opened at the Broadway Theatre on March 23. Eva Noblezada and Alistair Brammer reprised their roles for the Broadway production.

The UK production toured the United Kingdom and Ireland throughout 2018, and productions were were slated for Australia and Germany in 2018.
Filmed Production Notes
Although the 25th Anniversary Gala performance was filmed live, additional “covering shots” were filmed in January 2016 and edited into the final film. Producer Sir Cameron Mackintosh noted that “It was decided not to digitally remove the stage microphones to remind viewers this was a stage event rather than a film.”

Releasing a filmed live version of the show before its Broadway opening was considered risky by some, however Mackintosh believed the film to be “the greatest cinematic trailer for a theatrical production that’s ever been produced.”

The trailer for the film was billed as a “theatrical trailer,” blurring the lines between cinema and theatre.

In reviewing the screening for What’s On Stage, Ben Hewis stated that the capture felt “cinematic,” and praised the way “Universal’s ultra-high-definition cameras bring everything into razor sharp focus in a way that wasn’t possible on the Prince Edward Stage.”

Hewis’ previously negative opinion of filmed live theatre was changed by the screening, and he encouraged others to get to the screening – ​​

Audiences enjoyed the screening as evidenced by tweets collected by the production on Storify, and reading tweets with the hashtag #MissSaigon25th. As has occurred at other filmed live screenings, audience members reported clapping after songs, and desiring to see the production live. Many tweets mentioned the strong emotional impact of the show, and repeatedly mentioned the need for tissues!