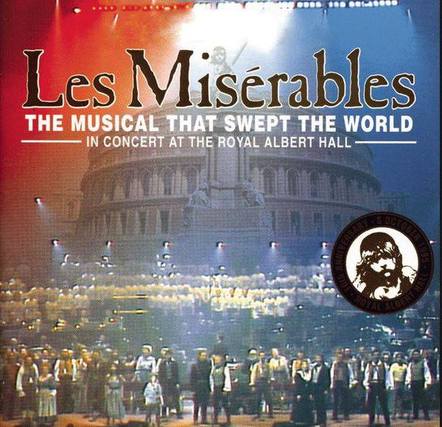 Based on the Victor Hugo’s novel of the same name, the musical follows convict Jean Valjean as he endures hardship and finds love against a backdrop of tumultuous mid-nineteenth century France.
This page contains affiliate links and as an associate I may earn income from qualifying purchases.
Stage Production Notes  ​
With an epic and luscious score by Claude-Michel Schönberg, Alain Boublil, Les Misérables began life as a French concept album.

Following a brief run at the Palais des Sports in Paris in 1980, Les Misérables was picked up by producer Cameron Mackintosh and translated into English. Trevor Nunn was bought on to direct, and the musical was workshopped and developed at the Royal Shakespeare Company.

Although the musical received negative reviews, audiences loved it, and the production transferred to the West End at the Palace Theatre in December, 1985.

Les Misérables was nominated for 4 Olivier Awards, including Best Musical. Patti LuPone was awarded Best Actress in a Musical for her portrayal of Fantine.

After a try-out in Washington D.C. at the Kennedy Center, Les Misérables opened on Broadway on March 12, 1987. The production was nominated for 12 Tony Awards, winning 8, including Best Musical, Best Original Score, Best Original Book, and Best Direction (Trevor Nunn).

Les Misérables, affectionately referred to as Les Mis (Les Miz for the American fans), quickly gained musical theatre cult status. It has been translated into over 20 languages, performed in 42 countries around the world, and is the longest running musical on the West End. Although now closed in New York, Les Misérables is the fifth longest running musical on Broadway.

To celebrate the show’s 10th anniversary, a special gala concert was held at Royal Albert Hall in London. The concert was described by Cameron Mackintosh as a “dramatic cantata rather than a fully staged production.” See Filmed Production Notes below for more info.

In 2004, the West End production transferred to the Queen’s Theatre.

A film version of the musical starring Hugh Jackman and Russell Crowe was released in December 2012.

The original West End production ran for 34 years, making it the longest running West End musical. It closed in July 2019 to allow for renovations at the Queen's Theatre.

During the Queen’s Theatre renovations, the much celebrated concert version was reprised next door at the Gielgud Theatre for a limited 16 week performance run. ​

The VHS was released in the UK and the US in 1995. Footage from an unspecified stage production was inserted into the concert footage.

The DVD was re-released in 2008, and again in 2012. The 2012 release by BBC Warner was a re-mastered version titled Les Miserables: 10th Anniversary Concert Special Edition. The re-release included new interview footage, a behind-the-scenes documentary, a commemorative booklet, and a replica ticket from the 1995 after-party.

Several reviewers claim the 10th anniversary concert to be the definitive recording of Les Miserables.

Les Miserables: 10th Anniversary Concert is available on DVD (as an Amazon affiliate I may earn from qualifying purchases made through this link).

with the The Royal Philharmonic Orchestra