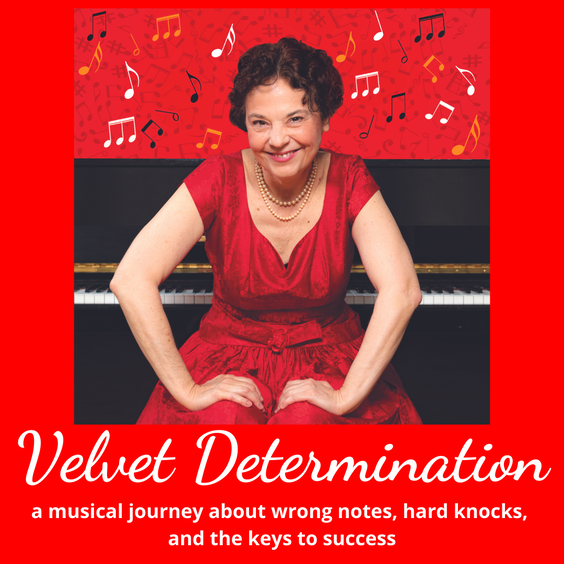 A musical journey about wrong notes, hard knocks, and the keys to success. An autobiographical solo show where actor, singer, and classical pianist Cynthia Shaw shares her journey from a tiny Colorado town to a prestigious New York City music school through virtuoso live piano performance.
Stage Production Notes
​Actor, singer, and classical pianist Cynthia Shaw was inspired to transform her personal story into a one-woman show after seeing the solo shows of friends, and after attending a performance by the pianist and story-teller Hershey Felder at 59E59 in New York City.

Shaw took a solo writing class with actor and playwright Austin Pendleton where students were encouraged to perform their work, and created what would become Velvet Determination.

Velvet Determination featured a wide range of music demonstrating Shaw’s virtuosic skill, including Bach, Debussy, Chopin, Puccini, Beethoven, Brahms, and Liszt, and Broadway composers such as Lloyd Webber, Bock and Harnick, Strouse and Charnin, and Kander and Ebb. The music choices were inspired by events from Shaw’s life and music she loved to play.

Shaw developed the show with director Page Clements and on September 21, 2018 performed the show for the first time at The Philadelphian. A week later, on September 27, Shaw performed at the United Solo Festival at Theater Row in NYC where she was awarded Best Festival Debut.

Reviewer James Bartholomew praised Shaw’s storytelling abilities, noting “Shaw gives each of her characters a charming and often humorous flair… Even her villains have a charismatic allure that keeps you smiling and wanting more.” Bartholomew also noted Shaw’s “authenticity and honesty” and her excellent piano skills, concluding “the play is a delight.”

Later in 2018, Shaw performed Velvet Determination at The Arts Center in Sandwich, New Hampshire, and the First Methodist Church in her hometown of Pueblo, Colorado.

In 2019, Shaw took the show on the fringe circuit, first performing at the Millibo Art Theatre in Colorado Springs in March, the Pittsburgh Fringe in April, and the Capital Fringe in July.

As with the play’s first outing, reviewers throughout 2019 were taken with Shaw’s storytelling and piano playing. In a review for onStage Pittsburgh, Caleigh Boniger stated Shaw “clearly knows her way around the keys,” and “earnestly tells her story, full of a quiet energy.” Writing for DC Theater Arts, Hilary Sutton felt the script could be further developed, but  extolled Shaw’s piano playing, noting “From Bach to Brams, Beethoven, and Debussy, Shaw’s mastery of classical piano is impressive.”

Following the Boulder Fringe, director Page Clements and Shaw agreed that Clements had worked Velvet Determination as far as she could. As a result, Shaw began to work with director Peter Michael Marino. Together Shaw and Marino re-worked the script, and wove more stories of Shaw’s jazz musician father throughout.

In January 2020, Velvet Determination was performed at the New York Theatre Festival's Winterfest at the Hudson Guild Theatre where it was filmed live.

In September 2020, the show was included in Solo Arts Heal - an online event hosted by The Marsh in San Francisco with play excerpts, talkbacks, and Q&As providing health and healing education and advocacy.

​In July 2021, Shaw performed Velvet Determination at the Gene Frankel Theatre storefront window to an audience sitting out on the sidewalk. The performance was co-produced by White Horse Theatre. In August, she performed at The Chain Theatre (New York City).

Edinburgh Fringe reviewers universally praised Shaw’s storytelling and prowess on the piano. David Pollock, writing for The Scotsman, noted “What elevates Shaw’s show above many of her contemporaries doing the same thing [presenting a one person show about the story of their own life] is that, as well as being a rigorous and personable storyteller, she’s also an extremely talented pianist” and “Her story is as melodic as the music she plays.”

Claire Wood in The Wee Review stated “Shaw brings a self-effacing charm to her story-telling, talking with touching honesty…” and concluded the show was “a fun, informative and interesting fifty minute window into an incredibly talented artist’s development as a performer…”

In a review for FringeReview, Patricia Silver described the show as “endearing and funny,” and noted “The light-hearted hour is thoroughly enjoyable and passes quickly.” Silver also praised Shaw’s piano playing, stating “ …she glides effortlessly along the keyboard, brilliantly interpreting compositions in many styles, from Baroque to Romantic.”

​Velvet Determination was filmed live at the Hudson Guild Theatre during its run as part of the New York Theatre Festival WinterFest in early 2020.

The capture was released on YouTube in June 2020, and re-released on Scenesaver in August 2022 as part of the Ukrainian PRO.ACT Festival whose theme was "Unbreakable."