The King and I

This page contains affiliate links and as an associate I may earn income from qualifying purchases made through these links.
Stage Production Notes  ​
The King and I is based on the true story of Anna Leonowens, a Western woman who was invited by the King of Siam to Bangkok to tutor the King’s children. Leonowens published two memoirs The English Governess at the Siamese Court (1870), and Siamese Harem Life (1873). Writer Margaret Landon adapted Leonowens’ memoirs into a novel in 1944. The novel was made into a popular film in 1946 starring Irene Dunn and Rex Harrison.

Gertrude Lawrence, seeking a new project to showcase her talents, bought the stage rights to Landon’s novel. She approached Oscar Hammerstein II and Richard Rodgers who took on the project, reportedly following encouragement from their spouses.

Following previews in New Haven, Connecticut, The King and I opened on Broadway at the St. James Theatre on March 29, 1951. Gertrude Lawrence played Anna, and Yul Brenner played The King (a role he would perform over 4,500 times).

The musical received lukewarm reviews. Critics were unimpressed by the score, and felt that the musical was not as strong as Oklahoma! or South Pacific.

Despite the critics (who, in reviewing revivals, later adjusted their assessments of the show’s success as a musical), The King and I was nominated for 5 Tony Awards. It won all 5, including Best Musical, Best Actress in a Musical (Gertrude Lawrence), Best Featured Actor (Yul Brenner), Best Scenic Design (Jo Mielziner), and Best Costume Design (Irene Sharaff).

Gertrude Lawrence was ill throughout the first year of the Broadway run, and died from cancer on September 6, 1952. Constance Carpenter, Annamary Dickey, Celeste Holm, and Patricia Morison all subsequently played the role of Anna during the musical’s original run.

The musical was adapted for film by Twentieth Century-Fox in 1956 starring Deborah Kerr (whose singing voice was provided by Marni Nixon), and Yul Brenner. The film was nominated for 9 Oscars, winning 5, including Best Actor in a Leading Role (Yul Brenner), Best Art Direction, Best Costume Design, Best Sound, and Best Music.

Warner Bros released a critically panned animated children’s version of the musical in 1999.

The King and I has been revived on Broadway four times, including at the Uris Theatre (now Gershwin Theatre) in 1977, the Martin Beck (now Al Hirschfeld Theatre) in 1985, the Neil Simon Theatre in 1996 (a re-staging of the influential 1991 Australian production directed by Christopher Renshaw), and the Vivian Beaumont at Lincoln Center in 2015.

The Lincoln Center Theater revival played for 499 performances before closing on June 26, 2016. The production shortly after began a national tour.

The King and I transferred to the West End in 2018. For more information see Filmed Production Notes below. It was the third West End revival of The King and I.

According to dramaturgy prepared by the Olney Theatre Centre in 2013, The King and I, along with other adaptations of Anna Leonowens’ writings, are banned in Thailand “where the government claims they misrepresent King Mongkut…” Communications and Media Studies scholar Dr. Caron Dann has noted that while Leonowens’ books were banned in Thailand during the nineteenth and early twentieth century, they are available for purchase in English-language bookshops.

Over the years, The King and I has faced criticism for “yellowface casting,” where non-Asian actors are cast in Asian roles. The 1991 Australian production directed by Christopher Renshaw was reportedly the first time all the Asian roles were portrayed by Asian actors. ​
Filmed Production Notes
The Lincoln Center Theater production transferred to the West End for a limited engagement, opening at the London Palladium on June 21, 2018. Kelli O’Hara, Ken Watanabe, and Ruthie Ann Miles all reprised their Broadway roles.

During its run at the London Palladium, The King and I was filmed live by Trafalgar Releasing. Formerly known as Picturehouse Entertainment, Trafalgar Releasing is also responsible for distributing An American in Paris, Funny Girl, and The Rocky Horror Picture Show Live.

Trafalgar Releasing screened The King and I: From the Palladium in cinemas around the world on November 29, 2018 Encore screenings were held in the USA on December 4, 2018.

The King and I was released on BroadwayHD in 2019.

During the COVID-19 shutdown, BroadwayHD partnered with Playbill and the Rodgers and Hammerstein Organization to present a free stream of The King and I. The stream was aired on BroadwayHD May 8 at 8pm, and available for 48 hours. Playbill also released a special online program for the musical. 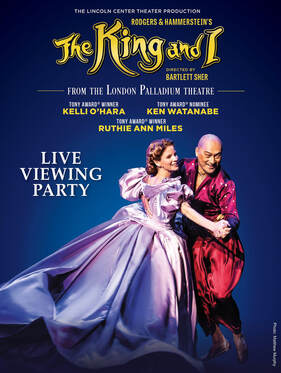