Show History
She Loves Me originally opened on Broadway in 1963 at the Eugene O’Neill Theatre, starring Barbara Cook and Daniel Massey. It ran for 301 performances. It opened in London a year later.

The musical was revived on Broadway in 1993 by the Roundabout Theatre Company, opening at the Criterion Center Stage Right, before transferring to the Brooks Atkinson Theatre. The revival starred Judy Kuhn and Boyd Gaines, and ran for 354 performances. It was also revived in London in 1994.

A second West End revival was scheduled to open at the Menier Chocolate Factory in December 2016, starring Scarlett Strallen.

2016 Broadway Revival
The 2016 revival, also produced by Roundabout Theatre Company, opened on March 17 at Studio 54 and played for 132 performances. Jane Krakowski, Gavin Creel, and Peter Bartlett reprised the roles they had played in the 2011 benefit (Ilona Ritter, Steven Kodaly, and Headwaiter, respectively).

Critics gave the 2016 revival glowing reviews, praising the sumptuous nature of the production and commending the cast for their outstanding performances. New York Times reviewer Ben Brantley stated the production had a “lingering and deeply satisfying sweetness,” while Time Out New York reviewer David Cote claimed that “The Roundabout gets so much right in a splendid, joy-stuffed production…”

The 2016 revival was nominated for a slew of awards, including 8 Tony Awards, 8 Outer Critics Circle Awards, 9 Drama Desk Awards, and 2 Drama League Awards. Among several wins in the Outstanding Actor and Actress categories, the show won Outstanding Revival of a Musical at the Drama Desk and Outer Critics Circle Awards.
Filmed Live Production
On June 15, 2016, Roundabout Theatre Company and Broadway HD in association with Ellen M. Krass, announced that She Loves Me would be the first Broadway musical to be streamed live online.

The broadcast took place two weeks later on June 30. Theatre goers were able to buy tickets to the live performance at Studio 54, and if they were unhappy about the presence of cameras were able to reschedule their tickets, or receive a refund.

The live stream commenced with a wide shot of the audience looking up over the stalls towards the balcony. Text across the screen read “Show will begin soon.” and home viewers could hear the chatter of the audience in the theatre. The lights dimmed, and the pre-show announcement was made -

Ladies and gentleman, thank you for joining us for an historic night at She Loves Me.

…for the first time ever in Broadway history, this performance is being streamed live all across the world [cheers and applause].

​Well, no, calm down. On Broadway, we’re always live, every night, 8 times a week baby!" 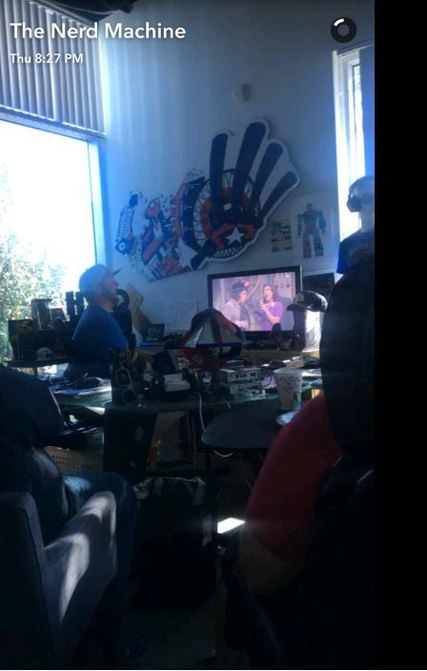 Image from Twitter
During the broadcast, the hashtag #SheLovesMeLive trended internationally on Twitter. Early viewing numbers showed that people from 60 different countries viewed the livestream.

The broadcast had only been scheduled to stream for one night, however due to popular demand it was made available for another 10 days.

Broadway’s inaugural livestream was well received. Margaret Lyons of the New York Times wrote "Save for a few technical hiccups that were resolved by the end of the opening number, BroadwayHD’s stream of this enchanting revival…did everything right.” C. Austin Hill writing for OnStage stated “for $9.99, my wife and I enjoyed a lovely evening. ”

Hill felt that the liveness of the broadcast contributed to the feeling of being in the room – “I was watching at precisely the moment that Laura Benanti’s ice cream fell in her lap. I heard the audience respond, and I saw her respond, and it felt like I was in the “room where it happened” (sorry not sorry).” Lyons had a different experience, noting that "On a laptop screen, that energy is diffused and remote." Hill also commented that the capture did not offer enough opportunities for the home viewer to see the whole stage.

Ticket sales at the Studio 54 box office went up following the livestream, however it is not clear if this is due to the closing date occuring shortly after the livestream, or a direct impact of the broadcast itself.

The livestream was made available for viewing at select cinemas around the United States through Fathom Events in early December 2016.

Following the cinema screenings, the livestream was made available on demand on BroadwayHD.