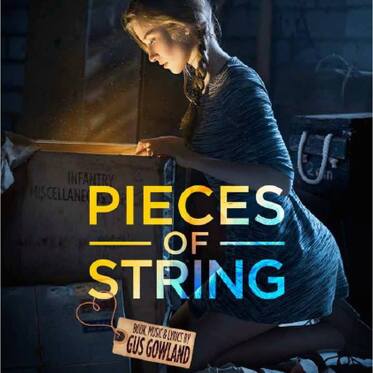 Pieces of String is an original musical set both in 1940 and the present day. When Jane returns to the family home after her father’s funeral to begin clearing out the house, she unfolds a devastating secret, the ramifications of which stretch across generations.
Stage Production Notes  ​
Writer and composer Gus Gowland was inspired to create Pieces of String after seeing a BBC documentary that briefly mentioned gay relationships in the UK and USA during World War II, and modern day stories of gay men being unable to donate blood. Gowland sought to widen the scope for the way gay male characters are portrayed in musical theatre (a topic which he later explored in his PhD dissertation), and attempted to ensure women were also equally represented in the musical.

Gowland wrote Pieces of String over 7 years. It began as a half-hour one act grad show for Gowland’s Masters of Musical Theatre Writing at Goldsmiths, and like Lift and From Up Here, was developed through Perfect Pitch Musicals. The musical also received development at Mercury. ​
​Pieces of String premiered at the Mercury Theatre Colchester on April 20, 2018 and run until May 5, 2018.

The musical received rave reviews, with many commentators calling for a West End transfer. Writing for The Stage, Mark Shenton stated it was a “seriously impressive and utterly lovely new British musical.” Jenna Barton summarized for The Spy in the Stalls that it was “rounded, sentimental and sharply funny original musical” and Paul T. Davis at BritishTheatre.com extolled, “overall, this is a bit of a triumph.”

Although some critics pointed out that the role of Jane could be written with more dimension, all noted the exceptional nature of the original book and music, Ryan McBryde’s effective direction, and the exceptional performances of the ensemble cast.

Pieces of String was nominated for a range of awards including the inaugural Musical Theatre Bookwriting Award from the Writers’ Guild of Great Britain (another 2018 filmed live musical, Everybody’s Talking About Jamie was also nominated). The musical won the 2018 Stage Debut Award for Best Composer or Lyricist (Gus Gowland) and the UK Theatre Award for Best Musical Production.

Several publications also included Pieces of String in their Best Theatre of 2018 lists, including Musical Theatre Review, BritishTheatre.com, and The Stage.

In response to the COVID-19 shutdown in 2020, and also to commemorate the 75th Anniversary of VE Day on May 8, Mercury Theatre Colchester streamed Pieces of String for 24 hours on Vimeo. The stream was made available for free, and viewers were encouraged to donate to Mercury Theatre.​ In addition to the stream, the Mercury Theatre Colchester announced local performers would be performing a short set of “beautiful, nostalgic songs,” outside the St Fillan’s Care Home and Hill House Residential Care Home in Colchester, and the release of a video created by members of the Young Company reciting a World War II poem, “The Siren” along with their grandparents.