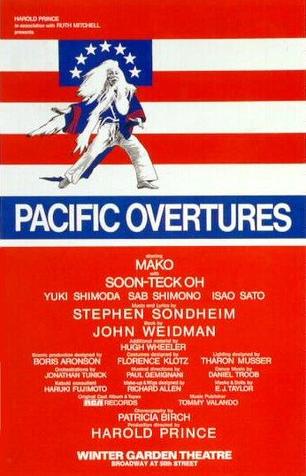 Self-described by composer Stephen Sondheim as “the most bizarre and unusual musical ever to be seen in a commercial setting,” Pacific Overtures is a concept musical set around Commodore Perry’s first visit to Japan in 1853.

Stage Production Notes  ​
Based on John Weidman’s play of the same name, Pacific Overtures shows life in Japan from centuries of isolation to contemporary prominence in the world through Kabuki-style theatre.

The reviews were mixed. New York Times critic Walter Kerr, while noting that some elements were “amusing,” described Pacific Overtures as “essentially dull and immobile.” Meanwhile, Clive Barnes, also of the New York Times, stated “It is a very serious, almost inordinately ambitious musical, and as such is deserving of equally serious attention.” After giving the musical much praise, Barnes summarized that Pacific Overtures “is very, very different.”

After 13 previews and 193 regular performances, Pacific Overtures closed on Broadway on June 27, 1976.

Pacific Overtures was twice revived off Broadway throughout the 1980s.

In 2003, the Japanese New National Theatre company presented a Japanese-language production at the Lincoln Center Festival.

Pacific Overtures played in the West End at the Donmar Warehouse from June 20 to September 6, 2003. The production was a transfer of the well-received 2001 Chicago Shakespeare Theatre production. The Donmar production was nominated for 7 Olivier Awards.

A Broadway revival opened at Studio 54 on December 2, 2004. Starring BD Wong, Evan D’Angeles, Joseph Anthony Fronoda, and Yoko Fumoto, the revival played for 69 performances before closing on January 30, 2005.  It was nominated for 5 Tony Awards.

Although several historians note that Pacific Overtures contains some of Sondheim’s best work, the musical has never been commercially produced with financial success.

Pacific Overtures is available to license through Music Theatre International. ​
Filmed Production Notes
On June 9, 1976, the matinee and evening performances of Pacific Overtures were filmed live at the Winter Garden Theatre by Herman Rush Productions.