Show History
Magyar Melody, a romance set in Hungary, premiered in Manchester at the Opera House in 1938. The production transferred to His Majesty’s Theatre in London, opening on January 20, 1939 and playing for 105 performances.

The score contained the songs 'The Lanccers', 'Were Ev’ry Pretty Girl a Song', 'Czarsas', 'Just Like a Gypsy Band', 'Magyar Melody', 'Home is the Harvest', 'My Heart Belongs to Budapest', 'Operetta Scene', 'Ballet (Moonlight on the Danube)', 'Music for Romance', 'Mine Alone', 'We Don’t Want to Flirt', 'A Tandem in the Park', and 'Duel at Dawn'.
First Musical "Outside Broadcast"
Prior to the war, the BBC was committed to bringing theatre to the masses via television. Most often, plays were re-created within a television studio at the BBC headquarters at Alexandra Palace, however some shows were filmed live at the theatre. These live broadcasts were called “outside broadcasts”.

The broadcast of Magyar Melody was predicted to be the “high-spot” of the outside broadcasts, and was scheduled to run for nearly three hours.

​Despite advertisements claiming “the entire musical play” would be televised, it is not entirely clear if in fact the whole show was broadcast. Radio Times on March 6 stated that an excerpt (Act 2, Scene 4), would be broadcast. On March 27, the same publication stated Magyar Melody would be “Televised direct from His Majesty’s Theatre.” Later, on 1 May 1939, the Radio Times claimed that Me and My Girl would be “the first time that a musical comedy has been televised in its entirety from a theatre (Maygar Melody did not quite fall into this category)”.

However much of the show was broadcast, The Observer reported on April 2 that the BBC “has been snowed under with congratulations on the televising of Magyar Melody direct from His Majesty’s Theatre…”  The reporter was so inspired by the broadcast, they wanted to see the show live -
"​Is there one of us who saw the show by our firesides who has not determined to go to His Majesty’s at the earliest possible moment and have the colour added to the delights of fine acting, dancing, grouping and scenery?” ​
Unfortunately the broadcast of Magyar Melody has not been preserved, although footage can be found on the 1946 BBC program Television is Here Again. As John Wyver states, “The status of these shots is something of a mystery. They cannot be from the live outside broadcast, since there was no form of telerecording at that date.” 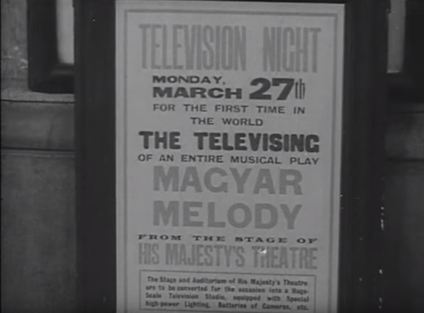