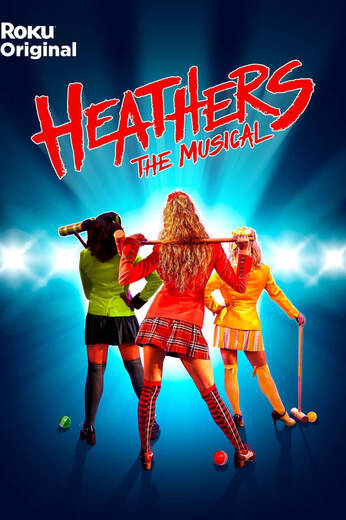 ​A dark comedy set at Westerberg High School where cliques rule. Veronica Sawyer is a reluctant member of the popular girl clique, the Heathers. With the help of newcomer J.D., Veronica sets to turn popularity on its head. Murder and mayhem ensue.
This page contains affiliate links and Filmed Live Musicals may earn income from qualifying purchases.
Stage Production Notes
Heathers: The Musical is based on the 1989 film Heathers by Daniel Waters.

Early reviewers were critical of Heathers “glib” approach to suicide, but Lehmann defended the film stating in the LA Times, “I believe we treat the moral issues responsibly. Teenagers don’t have any problem with it; it’s always adults who are shocked.” Despite being a flop at the box office, the film went on to become a cult classic.

The original Heathers film is available to stream via Amazon.

Director Andy Fickman and writer/composer Kevin Murphy had just released the film version of cult musical Reefer Madness in 2005 when they were approached to create a musical version of Heathers. Laurence O’Keefe, composer of the off-Broadway smash hit Bay Boy and Broadway’s Legally Blonde (filmed live by MTV during its Broadway run) was also bought on to the team.

Following developmental readings in Los Angeles, and a concert version performed at Joe’s Pub in NYC in 2010, Heathers: The Musical premiered at the Hudson Backstage Theatre in Los Angeles on September 21, 2013 for a limited engagement run. The entire two-week run was sold out before it had even opened.

On March 31, 2014, the 25th anniversary of the original film’s premier, Heathers: The Musical opened off-Broadway at New World Stages.

Overall, reviewers were not impressed by the musical. They felt the musical lacked the bite and social critique of the original movie, and also felt Fickman’s direction missed the mark. Writing for The Guardian, Alexis Soloski stated the musical “replac[ed] black comedy with candy-colored camp,” and concluded “…this iteration? As Veronica remarks: “It’s whatever.””

In a review for Entertainment Weekly, Kyle Anderson similarly lamented that the musical “misses just about everything that made the film great, making it not only a colossally disappointing adaptation of a beloved property but also a generally unpleasant theater experience.” Although Anderson disliked the production overall, he praised Barrett Wilbert Weed for her portrayal of Veronica.

While The Hollywood Reporter’s David Rooney and The New York Times’ Ben Brantley also felt the show missed the mark, they noted the musical’s appeal to a young audience. Rooney concluded the musical “at least salutes a late-‘80s pop-cultural touchstone with the affection it deserves.”

In a rare glowing review, Variety’s Marilyn Stasio extolled “The witty Off Broadway show… plays strong to a multi-generational aud [sic]… Someone of the current generation should shake a leg and transfer this winner to Broadway.”

After 17 previews and 145 regular performances, Heathers: The Musical closed off-Broadway on August 4, 2014.

In 2018, independent production company Rabbit Soda Productions created a short film based on the musical. Directed by Charlotte Sofia Briones, the short is available to view for free online.

After a London workshop presentation of the musical which incorporated new songs, Heathers premiered off-West End for a limited run at The Other Palace on June 9, 2018. The run sold out, reportedly breaking box office records at the venue.

After closing at The Other Palace on August 4, 2018, Heathers transferred to the West End where it opened at the Theatre Royal, Haymarket on September 3, 2018. Once again the musical was directed by Andy Fickman, with set and costume design by David Shields, lighting by Ben Cracknell, sound by Dan Samon, and choreography by Gary Lloyd.

As with the off-Broadway production, the West End transfer received mixed reviews. While critics universally praised the performances of the cast, they had divided feelings over the score, and the effectiveness of the show overall.

Hadley Freeman, writing for The Guardian, praised Carrie Hope Fletcher’s “energetic sweetness” in her portrayal of Veronica and Jodie Steele’s “close to stealing the show” performance as Heather Chandler. The Stage’s Tim Bano also extolled the performances of the cast, and noted that “Andy Fickman’s direction and Gary Lloyd’s choreography excel when it comes to the three Heathers.”

While Freeman found the score to be “generic,” Bano described it as “thrilling… full of bopping pop songs and moody ballads.”

On the success of the show overall, Freeman felt that the bite had been taken out of the original source material, while Ann Treneman in The Times disdainfully claimed “It’s a cult, basically.” Conversely, Tim Bano stated “It turns out Heathers is a masterful deconstruction of hypocrisy and a hymn to acceptance and tolerance.”

On June 21, 2021, Heathers: The Musical returned to the West End, once again opening at the Theatre Royal Haymarket.

A UK tour was launched a month later in Leeds in July 2021.

Heathers transferred back to The Other Palace in November 2021, where it was filmed live (see Filmed Production Notes below).

The film of Heathers has also been adapted into a television series. The series, pitched as a modern retelling of the movie, was first slated to be developed by Bravo, and after a brief stay at TV Land was picked up by the newly rebranded Paramount Network in 2017. The March 2018 premier was delayed due to the shooting at Marjory Stoneman Douglas High School in Parkland, Florida. The new premier in October 2018 was also curtailed by another mass shooting at the Tree of Life Synagogue in Pittsburgh, Pennsylvania. As noted by Screen Rant writer Kayleigh Donaldson, “In 2018, that kind of violent fantasy [represented by the original film] isn’t a harmless pipe-dream: It’s a fear that millions of American kids live with every day that could easily become a reality… The morbid truth of the matter is that if the Paramount Network had to shelve or postpone every episode of Heathers whenever there was a mass shooting, the season would never fully air.”

Songs from the musical were included in an episode of the high school based series Riverdale in 2019.

Heathers: The Musical is available for licensing via Concord Theatricals. The materials are based on the 2019 West End production.

A teen edition, which leaves out the profanity, and drug and sexual references, is also available. As writer O’Keefe noted in Playbill upon the release of the teen edition in 2016, “By removing all the hot-button [material]…what was left was adolescents trying to be cruel to each other or trying to be kind to each other, trying to hurt each other or trying to save each other, and an amazing thing happened… it removed one extra layer of veil or insulation between the performers and the actual truth of the show, which made for a more intense, moving, awesome, funny and scary experience than we thought.”

​As noted by Leah Putnam in Playbill, Heathers: The Musical has gained its own cult following thanks to the popularity of the original cast album, and licensing which has allowed for a high number of regional and school productions.

There are currently two cast albums for the show - the World Premier Cast Recording and the Original West End Cast Recording.
Filmed Production Notes
Opening Date: November 25, 2021
Closing Date: February 19, 2023
Air date: September 16, 2022
Release Medium: online
Where to watch: The Roku Channel (currently only US and Canada)
​
Heathers: The Musical opened for a second time at The Other Palace on November 25, 2021.

Between May 3 - 19, 2022, the production went on hiatus to allow for filming. On May 19, two performances were filmed with a live in-person audience, with tickets allocated via a ballot.

The film capture was directed by Andy Fickman who, according to an interview in Theatrely, desired “to give the [viewer] the best seat in the house”. Fickman reportedly drew inspiration from telecasts of the Tony Awards, the Macy’s Day Parade, other recent proshots such as Hamilton, Come From Away, and Newsies, and the Rocky Horror Picture Show (of which stage versions have also been filmed live).

Writing for WhatsOnStage, Alex Wood praised the production for using the show’s current cast with “emerging talent” for the capture, rather than bringing in previous “major stars”.

In August 2022 it was announced that the capture of Heathers: The Musical would be available to stream on The Roku Channel. Viewers were not required to have a Roku device, as the stream was to be made available online and via all Roku apps.

On September 1, 2022 the production hosted a Big Fan Day which included choreography and vocal workshops with the cast, a “make your own scrunchie workshop” Q&A’s with cast members and actors from the original film, and cosplay.

Heathers: The Musical was released in North America on Roku on September 16, 2022. On the same day, the production shared via Twitter that information on further international releases would be announced at a later date.

Reviewers were divided in their opinions of the musical and the capture itself. John Serba, writing for Decider, stated “it’s not an expensive production, merely a filmed version of the stage version… And the result is fine, just fine.” Serba also agreed with some of the in-person critics in claiming that the musical was a “diluted form” of its movie predecessor. Meanwhile, Ashley Hajimirsadeghi stated on MovieWeb “With great performances, this is one not to miss.”

Curtain Call’s Helen Sullivan stated “Heathers translates well on the screen while also keeping the elements of a stage production.” Alex Wood in WhatsOnStage praised Andy Fickman’s use of wide shots which opened up the “intimate” stage and allowed “the big ensemble numbers to pop,” while close-ups “peppered throughout [added] greater dynamism and flare.”

Sullivan and Wood also praised the production’s choice of including the live in-person audience in the capture, noting that the musical’s fandom — members of whom are referred to as “corn nuts” — were central to its success.

On January 18, 2023, Heathers: The Musical will host a sing-along performance with audience members encouraged to dress up in 80s inspired outfits.

Initial announcements had shared Heathers at The Other Palace would run until February 2022, however as of November 2022, it is scheduled to close on February 19, 2023.