This page contains affiliate links and I may earn income from qualifying purchases made through these links.
Stage Production Notes
Born Rose Louise Hovick, Gypsy Rose Lee was a writer, actor, and a burlesque performer. Her memoir, Gypsy, was published in 1957 and two years later became a smash-hit Broadway musical. The musical has become a staple of musical theatre, and an almost guaranteed Tony Award-winning star vehicle for the woman playing the indomitable stage mother, Mama Rose.

With music by Jule Styne and lyrics by Stephen Sondheim, Gypsy opened on Broadway at the Broadway Theater in 1959. Directed and choreographed by Jerome Robbins, the production starred Ethel Merman as Mama Rose, and Sandra Church as Louise. The production was immensely successful, and was nominated for 8 Tony Awards (though did not win any, losing out to Fosse's Redhead ​for Best New Musical).

Gypsy played on Broadway for 702 performances before closing on March 25, 1961.

Chichester Festival Theatre staged a new production of Gypsy directed by Jonathan Kent and starring Imelda Staunton. The production opened on October 6, 2014. It received rave reviews and played to sold out houses.

The Chichester Festival Theatre production transferred to the West End, opening at the Savoy Theatre on April 15, 2015. Once again, the production received rave reviews. It was nominated for multiple awards including 8 Olivier Awards. It won 4, including Best Actress in a Musical (Imelda Staunton) and Best Musical Revival.

Various reports claimed that the Chichester production would transfer to Broadway in 2017 or 2018, though the transfer did not eventuate.

Gypsy is widely performed and is available for licensing through Concord Theatricals. 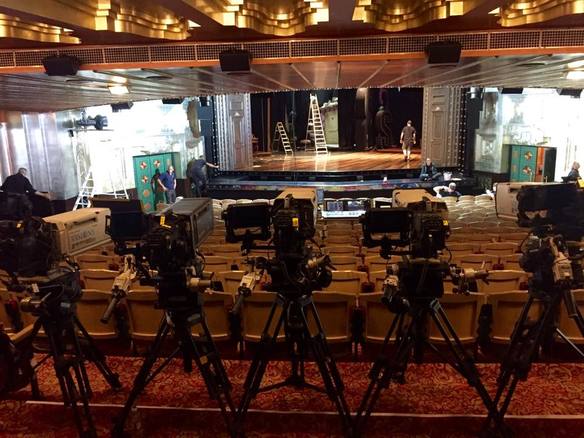 Savoy Theatre
Filmed Production Notes
The Chichester Festival Theatre production of Gypsy was recorded live during its West End run at the Savoy Theatre over three performances. It was broadcast on UK television on BBC4 on December 27, 2015.
​
The film was directed by Lonny Price, and edited by Gary Bradley. The film opens with the overture, which plays while the camera cuts between black and white shots of the conductor, tight close-ups of the actors applying make-up, combing their hair, tying their shoes, walking up and down stairs backstage, a stage hand sweeping the stage. The curtain rises and a bright and colorful stage full of children and balloons is revealed.

On BroadwayWorld.com message boards, people discussed the thrill of being able to watch (or re-watch) the production. Some noted that the stage lighting, particularly the strobe effect, did not translate well on screen, and that the production was perhaps better experienced live in-person.

The Express reported that “The broadcast gave BBC Four a rare chance to trend on Twitter, beating out big budget television shows.

Gypsy: Live at the Savoy Theatre aired in the United States on PBS's Great Performances in October 2016, and was later released on BroadwayHD.

The musical was added to the Netflix catalog in the UK in November 2021.