Stage Production Notes
Daddy Long Legs was first performed at the Rubicon Theatre Company, starring Megan McGinnis, in 2009. It has since had productions in Canada, Japan, and England.

The off-Broadway production, starring Megan McGinnis and Paul Alexander Nolan, began previews on September 10, 2015. It officially opened on September 28, 2015. Will Reynolds took over the role of Jervis on October 29, and Adam Halpin (who also happens to be McGinnis’ husband) replaced Reynolds on November 20.

The musical garnered several award nominations. Megan McGinnis won the Lead Actress in a Musical Ovation Award in 2010 for her portrayal of Jerusha, and the show won the 2016 Drama Desk Award for Outstanding Book of a Musical. 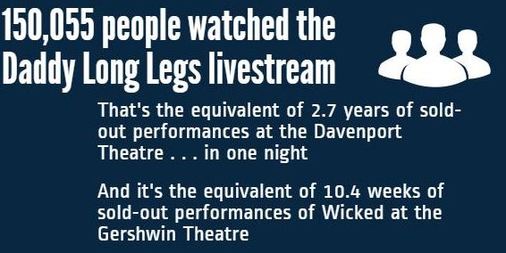 Visit The Producer's Perspective for more info
Filmed Live Notes
Daddy Long Legs was the first off-Broadway musical to be livestreamed. The livestream took place on December 10, 2015, and was re-broadcast three more times in the following days to allow for audiences in different time zones to tune in at “prime time”.

The livestream was made available online via YouTube, BroadwayHD, and Livestream. Using Livestream apps, viewers were able to watch on Roku, Apple TV, and personal devices. It was viewed by over 150,000 people in 135 countries - or as Ken Davenport put it, the equivalent of 2.7 years of sold out performances at the theatre.

In June 2017, the livestream of Daddy Long Legs was made available to view on demand on BroadwayHD.

On May 21, 2020, producer Ken Davenport's hosted a Daddy Long Legs reunion on The Producer's Perspective Live, a nightly program on Facebook Live created in response to the COVID-19 shutdown. Davenport interviewed fellow producer Michael Jackowitz, director and book writer John Caird, composer Paul Gordon, and actors Megan McGinnis, Paul Alexander Nolan, and Adam Halpin. Viewers of the reunion were given a code to watch Daddy Long Legs for free on BroadwayHD for a limited time.