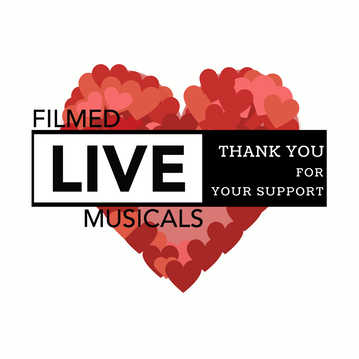 Filmed musicals bring joy to people around the world, create connections between theatre lovers, and shows what can be possible in bringing theatre to the screen. Filmed Live Musicals creates a centralized place to search for information on nearly 200 stage musicals (and growing!) that have been legally filmed and made publicly available. The Filmed Live Musicals podcast features interviews with actors, producers, and creatives about the joys and challenges of filming live theatre.

The idea of Filmed Live Musicals began as my thesis for my Masters in Music Theatre at the Royal Central School of Speech and Drama. I saw a cinema screening of Lincoln Center’s Company with Neil Patrick Harris, Patti LuPone, et al., and Broadway producer Ellen M. Krass said in a taped interview that she couldn’t get funding for filming the show because investors hadn't heard of filming live theatre. Having grown up watching Into the Woods on VHS I wondered why.

​Shortly after graduating, I was diagnosed with acute myeloid leukemia. The treatment was debilitating and one of the hardest things was not being able to go to the theatre. But if I couldn’t go to the theatre, the theatre would come to me! A literal lifeline was watching stage musicals on screen, whilst building a database to document all the shows I could watch from home. I wanted to share the magic of filmed musicals with the world, and so Filmed Live Musicals was born!

As you love musicals as much as I do, I invite you to make an ongoing donation to extend the reach of Filmed Live Musicals. As an alternative, I’d love you to consider a one-off donation. You’ll be helping to spread the love of musical theatre around the world and contribute to a new frontier of theatre on screen.

Thank you for your generous support of Filmed Live Musicals!